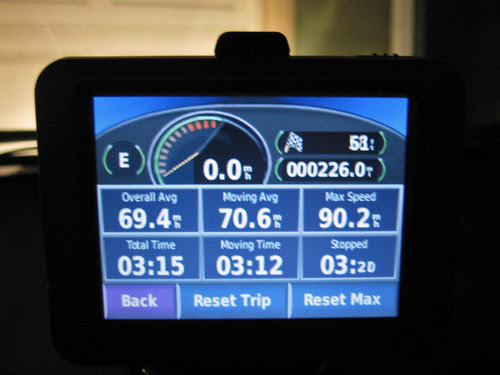 Wanting to avoid the bulk of the traffic, I left at 7:45pm (though I probably could have done just as well leaving a lot earlier, this being Christmas and not Thanksgiving).

I actually would have left 15 minutes earlier, but a neighbor's guest had gotten his BMW X3 stuck in a plowed snowbank -- isn't traction control supposed to keep that from happening? -- so I spent a few minutes helping to dig them out. Not sure how much I helped, but it felt right.

Anyway, I got in just at 11pm. Total travel time: Three hours and 15 minutes, averaging just under 70mph, which is really good for me. I don't usually go more than 80, the 90.2 max speed shown above notwithstanding -- I only did it to get past a left-lane hog on the 2-lane section of the NJ Turnpike; he keep speeding up to block me when I moved to pass.

Christmas Music in Review
I've gotten detached from Christmas as the years have gone by. I didn't send a single Christmas card this year, and could barely be bothered to stick a suction-cupped decoration light in the window. I guess that you really need kids to keep the full effect.

Another contributing factor is that I don't really listen to music on the radio very much any more, so I don't get to hear much Christmas music. I made an effort to seek out Christmas tunes on the drive up (aided by a dead cassette player keeping me from using my iPod), though it only reinforced the notion that broadcast terrestrial radio sucks (especially in that stretch around Delaware, in the zone between the DC, Baltimore and Philly stations).

Even with on-demand music mooting most of the old-fashioned seasonal rationing of Christmas music, it's still not a real Christmas to me, unless I hear a few classic tunes -- "classic" as defined by what was popular when I was 12-13, those formative years that lock in your childhood tastes:

* My must-hear song is Band Aid's Do They Know It's Christmas? which holds up really well, even with all the "Wow, is that really Bono/Sting/Boy George?" that comes with it.

* Christmas Wrapping, by The Waitresses. I always found it an amusing contrast to their other hit, I Know What Boys Like. It suffers from no lack of airplay.

* Feliz Navidad, by Jose Feliciano. Nothing more needs to said. I also associate it with the Christmas Eve on Sesame Street (they both come from the '70s and the song is used in the special), which I haven't seen in years, but still makes me tear up remembering it.

* A late entrant for me is Mariah Carey's All I Want for Christmas Is You. While it's a good song, I heard it an inordinate number of times on the drive up.

* A few Christmas songs that are good year round include The Kinks' Father Christmas, U2's version of Baby Please Come Home, The Pogues' Fairytale of New York (the last of which I don't really even think of as a holiday song).

* The Bing Crosby and David Bowie collaboration Peace on Earth/Little Drummer Boy, which is supposed to be part of the Christmas canon, but I haven't heard it on the air.

There are a few others -- classic standards, mostly, and some of the lesser 80s songs, like Strange Brew's Bob & Doug Mckenzie's 12 Days of Christmas (though, notably, not Bruce Springsteen's Santa Claus Is Coming to Town -- never liked that one), but finally, Christmas for me isn't complete without this song:

The Jimmy Smith Trio "Jingle Bells" is pretty good, as is any version of "Please Daddy, Don't Get Drunk This Christmas."

I also like the Bob Dylan and Brave Combo versions of "Must Be Santa."