You Can't Spell "Mullet" Without "Me"

So here's a followup to my mullet photo and associated blog entry -- a Flickr user found the photo I posted from 1992, and used it to better illustrate the multifaceted nature of the mullet in its wikipedia entry: 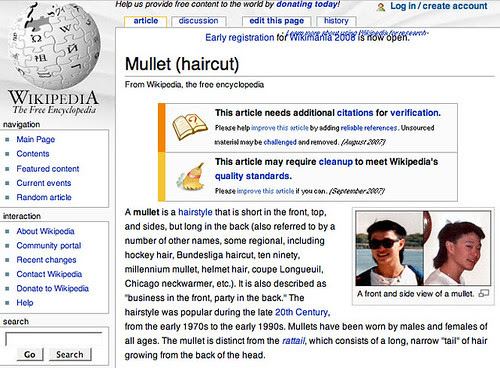 Let's see the Encyclopedia Britannica try to match this kind of credibility.
The edit was made with no prompting from me, but of course it has my full support, for however long it lasts.

While we're on the subject of goofy pictures of me (and really, when aren't we?), here's a photo of me at the 2008 Baltimore Kinetic Sculpture Race -- a reporter for the Baltimore Metromix took it and asked me, "If you had a kinetic sculpture, what would it be?" 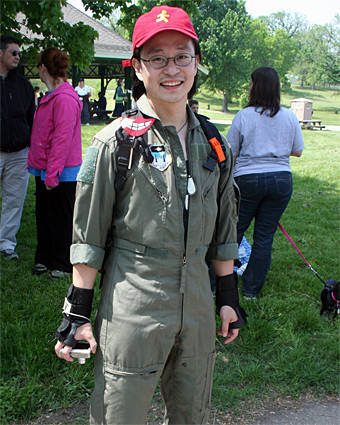 I'm fortunate that this photo made it online, as I didn't manage to take any pictures of myself or my costume (such as it is).

The photo was taken in Patterson Park, just outside of the sand obstacle. I'm wearing a Nomex flightsuit that I picked up from a military surplus sale (I wore it one other time, on Halloween) -- it's a 34 short, and a little snug. I was worried that it was going to give me the dreaded front wedgie, but it was apparently okay.

It came with Air Force Academy insignia, which I left on. The cardboard grin is official race Spectator equipment; on the other backpack strap is an orange safety whistle. The dog tags are really geeky and I'll talk about them some other time. The red Running Man cap is AIM swag from April's Tech Cocktail DC 2 (I wore it because it was red -- no other endorsement is implied), and of course I have my skating wristguards on.

oh that is so cool -> you're photo used for wiki's mullet entry!

a little scary to think no permission was necessary to use the photo. or did you say it was okay?

PrettyParker: Nearly all of my Flickr photos are under the Creative Commons Attribution-Share Alike 2.0 Generic license (though I guess I have to update to the 3.0 version). They're meant to be used by other people, so long as they adhere to the terms of the license.